Today is International Day of the Air Traffic Controller, celebrated by Air Navigation Service Providers across the world. The Irish Aviation Authority would like to thank our Air Traffic Controllers for the important work they do in keeping passengers and airline crew who fly in Irish airspace safe.

It is fitting that today the aviation community acknowledge the profession of air traffic controllers for the critical role they undertake in keeping our skies safe.

In 1942 the Department of Industry & Commerce recruited Capt. JP Saul as Chief Air Traffic Control Officer and gradually civilian staff were recruited into the ATC service. The final provision of civil ATC service by military personnel was in 1948 at Dublin Airport.

Mr. Peter Kearney, Chief Executive Irish Aviation Authority (IAA)and former air traffic controller, said the quality of service provided by Ireland’s air traffic control officers over the past century has been exemplary and this has been recognised throughout the world.

“While modern technology has changed the way we manage air traffic, one key element of their responsibilities has never changed - the safety of airline crews and their passengers.

“Today our teams manage the safe passage of over 1 million flights in Irish airspace, including those en-route to international destinations as well as those landing and taking off from Irish airports. We are committed to continuing to invest in making sure our airspace is safe,” he said.

“I started in the air traffic training centre, which was a prefab building where Terminal 2 is now located. It was then that I realised that I was the first woman to be employed to do this job. Being the only girl never crossed my mind as a problem.”

After her training, Aine went to the air traffic control tower as an assistant working in the original one in the old Dublin Airport terminal. She said she was very proud of the part she played on the ATC team. “Air Traffic Control officers in Ireland and around the world have achieved so much to improve safety and this will continue in the years to come. l will miss my friends and colleagues in the tower.”

Today there are 286 highly trained ATC personnel in the IAA and every year the company recruits a new student class of air traffic controllers, who will be fully trained in this exciting and interesting career.  It takes 18 months to train as an air traffic control officer and the IAA is currently seeking suitable recruits for the next phase of training. The company is also recruiting engineers who play a key role alongside ATC staff in the safe and efficient management of aircraft in Irish skies. 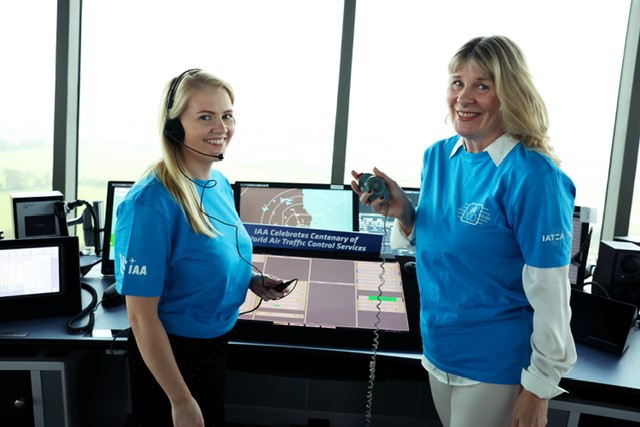