In 2015 the Irish Aviation Authority safely and efficiently managed 1 million flights, up 5.6% on 2014. This equated to an average of 2,811 flights every day managed by the IAA at Irish State airports, through Irish airspace and on the North Atlantic.

Dublin air traffic increased by 10% in 2015, when compared to the previous year, while Ireland’s en route traffic movements (flights that pass through Irish airspace but do not land) increased by 5.4%. The IAA’s North Atlantic Communications service also recorded strong growth of 5.3% in 2015.

Eamonn Brennan, IAA Chief Executive, said, “2015 was a great year for the Irish aviation industry and this is reflected in landmark 1 million flights that were safely and efficiently handled by the IAA. Of particular note was the dramatic growth experienced at Dublin Airport.  Dublin Airport is now operating at 2008 levels and there is a pressing need to construct a new parallel runway at Dublin Airport as soon as possible.  There was also very strong growth in our transatlantic traffic, driven by the strength of the dollar and the low cost of oil. Cork and Shannon have had a number of announcements of new services in recent months, which should see those figures rise in 2016. All in all, I am very pleased with our performance in 2015 and am optimistic for another year of robust growth in 2016”. 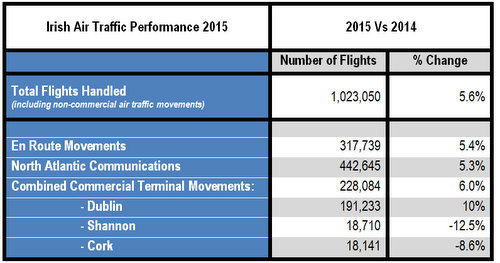 There was a significant increase of 17.3% in Ireland’s en route traffic movements (flights that pass through Irish airspace but do not land) to 25,353 movements during December 2015 – the largest monthly increase recorded in 2015.

The IAA’s North Atlantic Communications flights (Europe / North America) also saw a very significant increase of 12.4% to 34,676 flights in December 2015, when compared to the same month in 2014.