Irelands Positive Air Traffic Performance in 2014 and the Year Ahead

At this stage in the year, the IAA has a pretty accurate projection for the performance of air traffic across Irish airspace and at Irish airports during 2014.

Every day, the IAA safely manages a huge number of aircraft through Irish airspace and on the North Atlantic, as well as at the main Irish airports (Dublin, Cork and Shannon). The busiest day this year was the 24th June when the IAA safely handled 1,955 flights in one day alone. 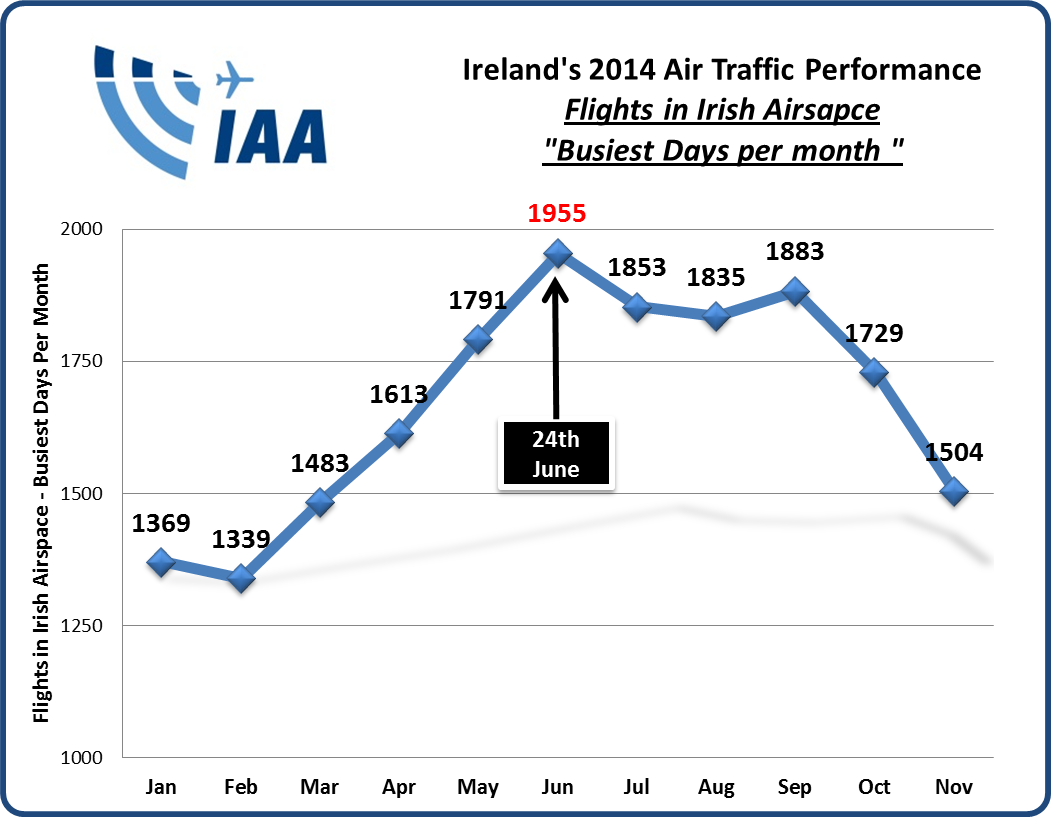 Eamonn Brennan, Chief Executive of the IAA said, “Air traffic is a great yardstick of the strength of the Irish and international economy. Our key air traffic markets on the North Atlantic, to/from Europe and Ireland itself are all expected to show growth this year, with further improved gains forecasted for 2015. This is reflecting improved economic performance in Ireland, North America and parts of Europe, as well as the continued growth of low cost carriers.

By and large, I am pleased with the performance of the Irish air traffic system during 2014. Ireland has a strategic role in the management of communications services on the North Atlantic and we’re looking at growth of about 4% during the year. We’ve handled an average of 1,166 North Atlantic Communications flights (Europe /US Flights) each day in 2014, compared to 1,112 in 2013. Likewise, our en route traffic movements (flights, which do not land in Ireland) are set to grow by just under 1% this year (with an average of 837 movements each day, up from 831 last year) – naturally, I’d like to see that higher in 2015 and fortunately the indicators are positive for next year, provided we avoid any further ‘double-dip recession’ across Europe.

I am particularly pleased with the improvements at Dublin and Shannon, thanks to the work of the daa and Shannon Airport Group to bring in new routes and new airlines. Dublin looks set to grow by about 6% this year, handling an average of 481 commercial flights each day, whilst Shannon will record an impressive increase of about 20% this year, with 60 flights per day. Cork unfortunately is reversing the trend, and will see a drop of over 3% this year; something we’d dearly like to see change for the better.

Combined, the commercial air traffic at the three airports will be up about 6.2% in 2014 – a pretty good reflection of increased demand from both the business and leisure markets to/from Ireland.

The future is bright in 2015, especially for Dublin Airport, with increased Transatlantic capacity and new routes from Aer Lingus, Ryanair up about 10%, a new service linking Addis Ababa / Dublin / Los Angeles (served by Ethiopian Airlines), and the arrival of Vueling (IAGs low cost airline) between Barcelona and Dublin to name but a few. 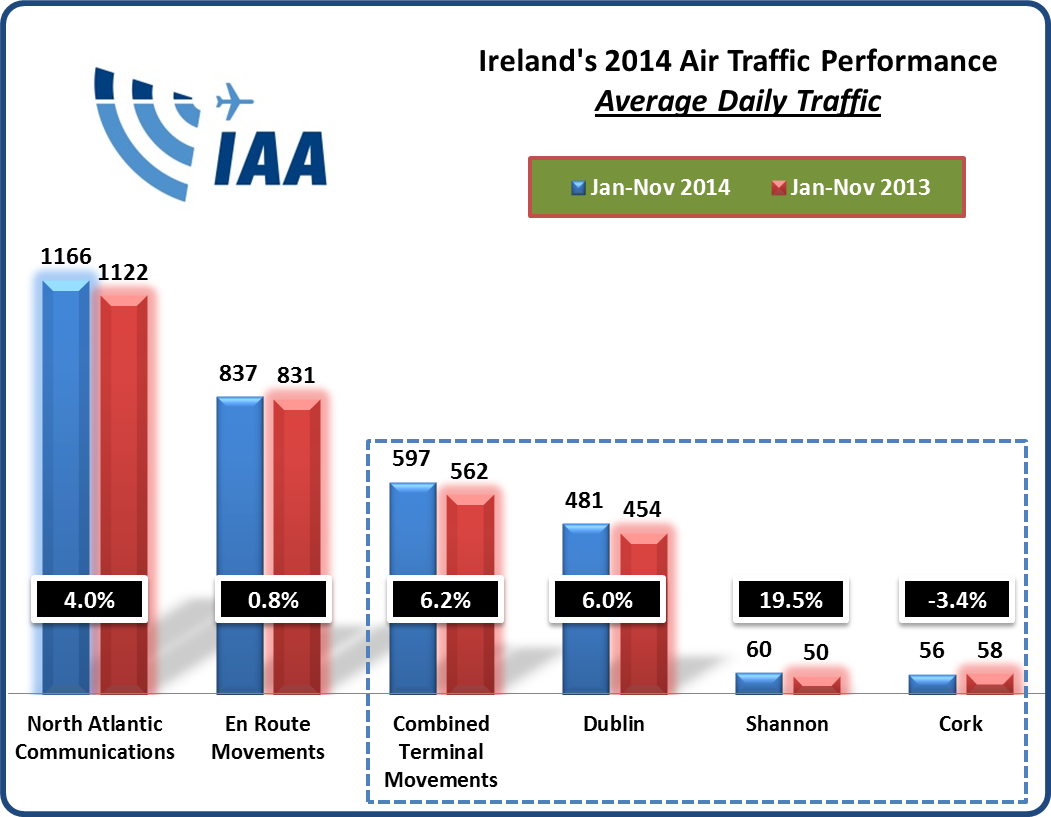 What is really important to look at is the performance of air traffic compared to the peak period in 2008. Encouragingly, the North Atlantic Communications flights are back to those levels with over 420,000 flights this year (on a par with 2008). En route traffic is a little behind, with about 301,000 flights in 2014 compared to 310,000 in 2008 but it is on the way back up.

When you start focusing on the terminal performance, you see how great an impact the recession had on Ireland. Back in 2008, we safely handled over 268,000 commercial movements at Dublin, Cork and Shannon airport. When everything went bust, we experienced a massive fall in demand, dropping below 200,000! Even this year, with over 6% growth, the figure will be about 215,000 commercial movements; about 20% less than peak, so there’s plenty of scope for further increases in the years ahead. 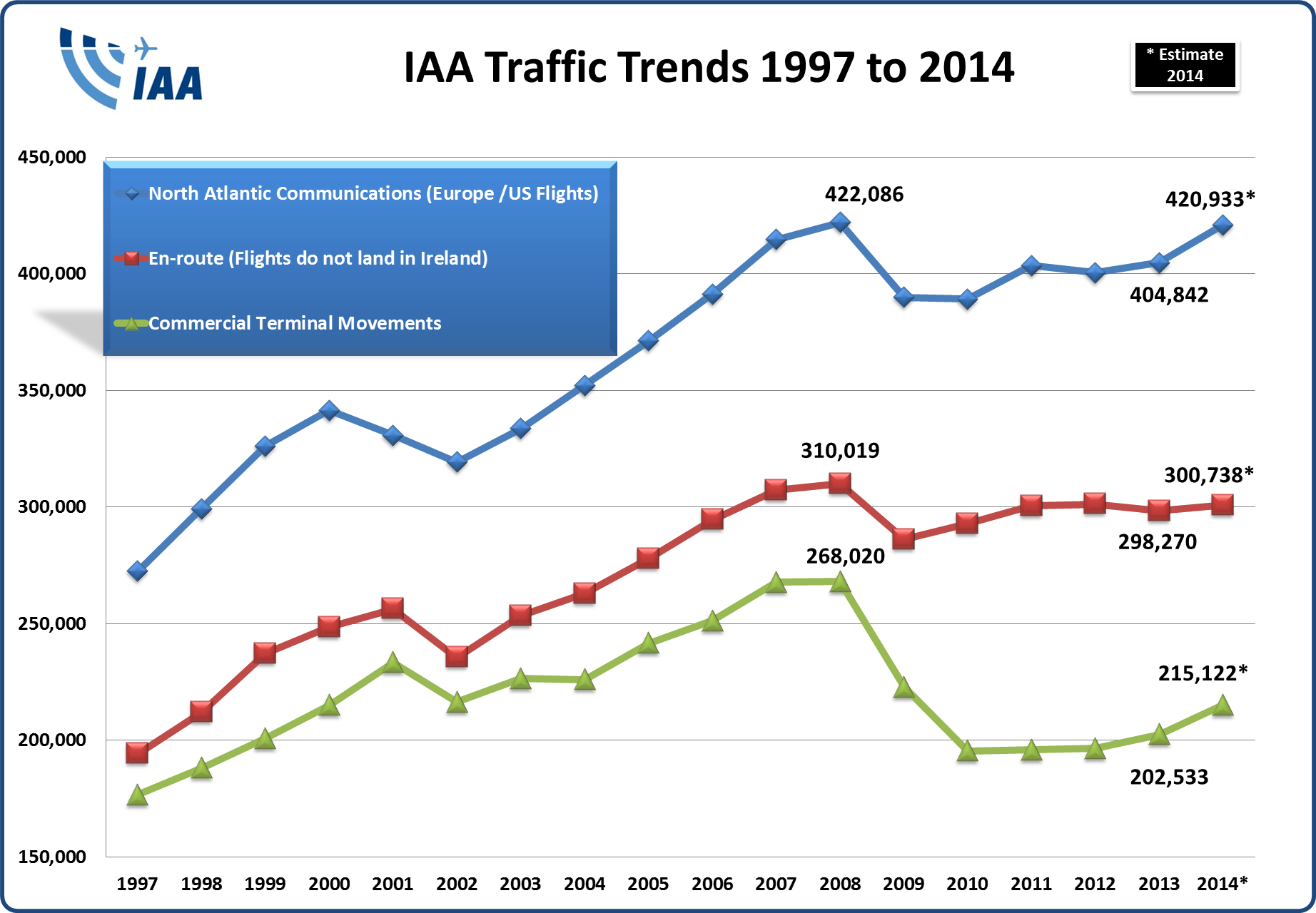 In summary, 2014 is a step in the right direction and reflects well on the status of the Irish and international economies across our key markets. I am very optimistic about the growth in air traffic services in 2015, through Irish airspace and at the main airports.

Finally, as the economy grows, the IAA will continue to support the airlines, the airports and the travelling public through the provision of safe, cost-efficient, and industry leading air traffic services in the years ahead.”

Focus on November 2014 and Year-To-Date

There were 21,708 en route traffic movements and 31,085 North Atlantic Communications flights during November 2014.

On a cumulative basis, the change in en route traffic movements and North Atlantic Communications flights for the period January-November 2014, compared to the same period last year, was 0.8% and 4% respectively.

On a cumulative basis, commercial terminal traffic for Shannon, Dublin and Cork airports for the period January to November 2014 was up by 6.2% when compared to the same period in 2013.