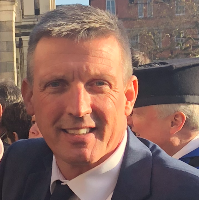 Barry is currently the Head of IAA International Development a role which he performs in conjunction with his duties as a Flight Operations Inspector. Prior to joining the Irish Aviation Authority Barry was as a line Captain in Ryanair flying the Boeing 737-800, he also worked in the Flight Safety Services Office and in the training department where he was a Training Captain.

Barry holds a MSc in Air Safety Management from City University London as well as other qualifications in business, law and regulatory enforcement. Barry also worked for 7 years as a lecturer in Dublin City University.