Busiest Ever Year for Irish Aviation as the IAA Handles a Record-Breaking 1.1 Million + Flights

The Irish Aviation Authority (IAA) confirmed today that 1,135,845 total flights were safely handled in Ireland in 2017, a new record.

This marks a significant increase in Irish air traffic of + 2.5% over 2016 figures.

Peter Kearney, Chief Executive Designate of the IAA said; ““Ireland as an island nation is hugely dependent upon aviation. The IAA are proud to have delivered a safe service to well over 1 million flights in 2017.

Aviation has opened Ireland up to the world and management of air traffic growth is a key driver of our economy.

The IAA have also commenced work on the building of a New Air Traffic Control Tower at Dublin Airport. The new tower will facilitate daa plans for a Northern parallel runway at Dublin and will be visible to all passengers travelling via Dublin from March 2018 onwards. The IAA continues to invest in a state-of-the-art air traffic management system and development of our staff, to facilitate an ongoing world class service to our airlines customers.” 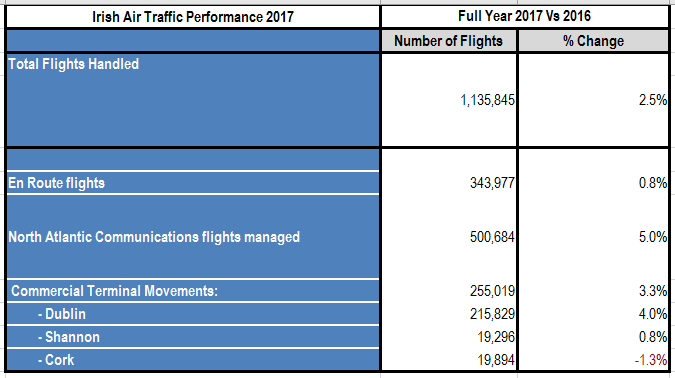